Waking up with the sun in your face and booze sweats then hopping right on your bike is something I like to think us filthy dudes have a lot of experience with, but holy shit son; It's a little different in the Mexican desert when you are trying to keep up with 100,000$ buggies on a fucking maze of trails where all you have to go by is tracks in the sand and dust in the air. I was completely lost a couple times but would just rage up the closest pile of rocks and see dust clouds in the distance and head that way. 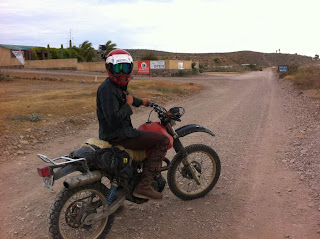 I rolled up on a posse of little Banditos that said some buggies had passed through town. They were mobbing my shit pretty hard so I got them to open the gate for me and tossed 100 pesos into the bush and tore off Houdini styles. Problem was now in this town with 8 buildings and about 800 roads leading out of town. It's pretty impossible to track anything in dry sand. I narrowed it down to about 40 possible roads and took the one that looked the chillest. I ran along farms for a while and crossed this gnarly river. I really didn't want to run out of gas in the middle of the fucking desert so I barged straight east towards the highway. Which you can do in the desert because there isn't shit to stop you. I already had a couple cactus flats(Jesse had one flat and it was in the middle of nowhere from a fucking 22gauge braid nail, which is hilarious because he has a millwork installation company) but anyways my new rubber prevailed and I was on the highway with 10 boring post-dirt kms to Todos Santos. Got some gas and had a tall barley pop before I headed into the hopefully small town to try and find Anita and all my gear probably should have asked where we were meeting. After a while I spot the chase truck with the red buggy and Anita's bike strapped on a trailer and see Anita on her dumb crutches chilling with some kid blasting fireworks outside of the hotel California. Turns out Jesse was there too (he was going to meet his lady on the mainland but all the ferries were booked til January. She changed her flight last minute and was landing in cabo the next day so he was back on the team for a bit) and he had a cold pacifico waiting for me inside. The American dude bro buggy tour showed up about 20 later and were glad I wasn't dead or anything; adding they were hitting another dirt trail for about halfway to cabo. Jesse was down and kept offering the Americans tequila whenever we caught up to there caterpillar stops but they never would because they were pussies and more so because they didn't want to fall off any of the sketchy fucking roads we were driving. The road reminded me of that one section of the Highline; Mad windey and curvy and sheer drops but instead of gravel its still all fucking sandman styles. Even in the mountain passes its all fucking sand in Mexico. The river crossings were cool. They were man pinner but you could that a couple times a year they would be over your head. About an hour of this spat us out on this huge delta, again all sand. There was a "road" that weaved through the delta but it was probably more fucked than just riding wherever the fuck you wanted. The buggies just disappeared on me while I was maxed in 5th standing up for about 10 minnutes straight. It was fucked, forever proving that in sand you just fucking grip and rip. I was eating everything. I found the buggies and stopped and taking turns hitting this jump and getting their picture snapped by Paul. I am fucking exhausted by this point and when Jesse gets there we dilly around a bit and head to the highway where we think they are headed. The culverts in Mexico are fucking perfect lounge chairs (typical) and we chill sesh. The dudes never showed so we just crammed to cabo on the highway splitting and drinking. 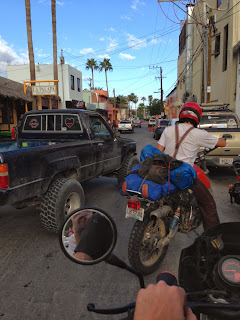 In cabo we have no clue where their shop is. We are splitting lanes into the city and this scooter brother shows up in the mix. We are ruling the highway for a while and come to a light. We ask if he knows where the spot is and he does the follow me head snatch and burns through the red to the left. We cruise with him for a bit and at one intersection he points down a road and splits. we find the dudes and Anita and our gear. Anita is staying with some family friends in this super fancy spot and us dirty gentlemen are not welcome. We find a cheap hotel which actually wasnt bad and head to the rippers. Checked out a couple bars played knuckles with this 7 year old street hustler girl who was slanging chiclets for about an hour outside a 24h pharmacia and ended up at some shitty peeler spot with a pool table a good introduction to cabo San shittus. The next day I ripped around on the beach for a bit, raging by tourists and ducking through all girl volleyball matches, giving everyone free sand cocktails filth styles. We grab Kris from the airport and head out to this spot they found on AirBnB which turned out to be the chillest spot yet. Fun road with many classic mexican washouts, huge sand canyons out of nowhere, i think i have gotten pretty good at the old unweight ditch jump move. We get to the spot on a beach called shipwrecks. This couple was so fucking chill and buddy loved tequila and green. A chill ass three days ended with me seeing jesse and Kris off and heading back to cabo to find the cripple. 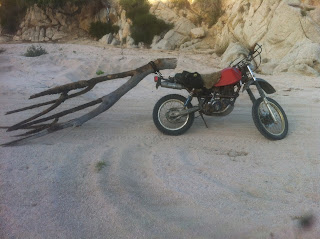 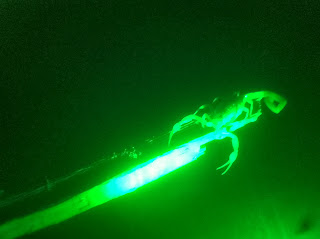 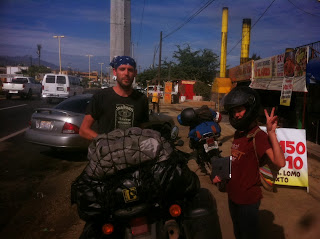 That night was the second time so far I slept in this dope hammock tree spot I found. Along the highway between san jose del cabo and cabo san lucas, there are tonnes of beaches you can ride down onto. It was night and I scoped one out but there were a bunch of mexicanos having parties on the beach, sketchy parties. I chill for a second an ponder the ponderable lounge mode on the T with a spliff and a modelo staring blankly down the coast. Right at that moment a huge fireworks display pops off maybe 20km down the coast and I am already en reclino in the perfect spot. A few more frostys and they're over and i decide to head inland. Under the highway and rip this trail with my shitty headlight and a flashlight in my mouth. I came across a bunch of sleeping cows blocking the trail and they all start huffing and puffing with their huge ass horns. I pull a quick 180 and take a different fork and find a dope pair of trees up on a little cliff and set up camp. I must have been zonked because I pulled the classic fall asleep in the hammock with a beer in your hand and wake up in a puddle move. No sweat when the sun cooks so hard every morning. Ran out of gas on the way back to cabo and had to push 4 or 5 miles to a pemex but damn that jumex tasted good when I got there.

As of now Anita and I are in cabo, I have my motor out to inspect a few things that look fine. I found a piece of the kickstart assembly in my sump(half of #26),

but I said 20 hail Tzuses so it's all good. Brother aint gonna split the case on the side of the road in mexico. Anita gets her cast off maybe tomorrow and then we're back at 'er. The one show feb 9th anyone?
Posted by brock at 2:12 PM