Tyler to the power of 2. 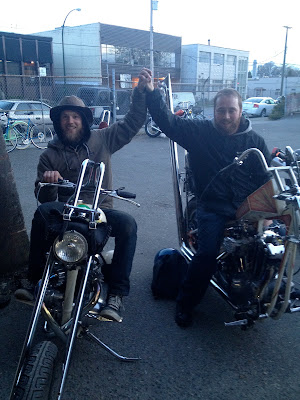 T squared is world domination. These Tylers created these two wild styles bikes at the same time, only miles apart and having never met until Born Free 2 at Long Beach. Lepore and i took the executive jet, while a crew of canadians pounded down the I-5.  WOW, that sportys got BC plates dude? Blasting us both. Cool bike, cool guy....... 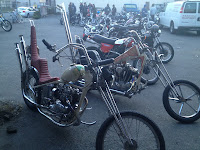 Fucking awesome sporty and a radical trumper; both bikes have: pipes to die for, killer girders, wacky pull backs and Myk Rock paint. These two tylers stole the show at the NFmc parking lot party.